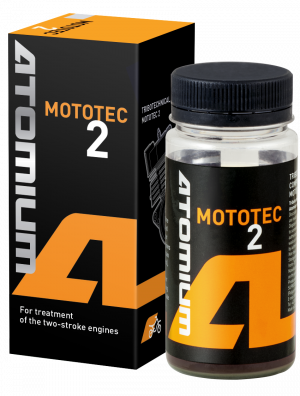 Oil additive to restore operating characteristics of 2-stroke engines of various technics: snowmobiles, jet skies, pit bikes, boat motors as well as various garden and construction tools such as lawn mowers, trimmers, chainsaw and others. The treatment of an engine by Atomium oil additive prevents scuffing in cylinders, reduces noise and vibrations, sufficiently slows down the speed of wear increasing service time of the mechanism.

Atomium compound Mototec 2 is chemically inactive and compatible with all brands of fuel and 2-stroke oils.

Reduces speed of wear of 2-stroke engines, as well as its noise and vibrations.

2-stroke engines are more efficient at higher RPM and are much lighter than comparable 4-stroke engines. Aside of it two-stroke motors are quite happy to work in any position and orientation – tuned to a side or upside down. All this makes them very popular to be used in many mechanisms.

However such engines tend to wear out faster. It happens because they normally work at higher revs than four-stroke motors and also because they have very special lubrication system – oil is mixed with fuel, which makes harder to lubricate friction surfaces properly.

Atomium Mototec 2 contains micro particles of a specially selected minerals. Whey in a friction area they alter friction processes. The part surfaces get able to capture and attach metallic particles appearing nearby as result of wear. Point by point a new surface layer is created. It is more resistant to wear and able to retain a permanent dense oil film.

Atomium 2-stroke oil additive may be used both for pre-mix engines (where mototec 2 is being added to the oil-fuel mix) and for oil-injected engines (in this case the compound should be added to the fuel tank).