How does ATOMIUM work?

Tribotechnical compounds are using unique ability of some sorts of natural minerals mined in Karelia – north-west region in Russia. The ability is to change processes of friction. To explain what exactly is changed it is reasonable to spend few words to the friction itself.

HOW DOES FRICTION OCCUR?

The friction never happens on the whole surface. On the micro level any surface has little peaks and hollows. Two surfaces abut each other with peaks. In a little local area around the two collided peaks the temperature may reach thousands degrees (Celsius) and enormous pressure. Normally peaks are being demolished and its tiny metallic parts float away in the motor oil. In next moment some other pair peaks are colliding into each other and so on.

It is exactly how the wear happens. Time by time more and more metallic particles fall into the oil. In average about 5 grams of metal (as much as 50 cent coin) are taken out of an engine each time you replace the oil. Loosing its little parts friction surfaces gradually change their shape. It leads to the enlarged gaps between engine detailsand therefore to the degradation of their functions. Engine loses its power, fuel consumption increases etc. 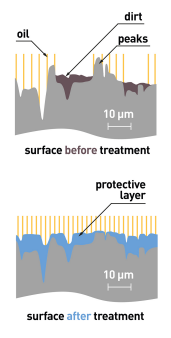 Micro particles of the active mineral are getting in the motor oil at the moment of tribotechnical compound application. Then they are floating in the oil everywhere where the oil is. Particularly they get in areas of friction.

When a particle of the mineral appears in area of very high temperature and pressure it activates electronic bonds between ferrum atoms in the surface and a little piece of metal in the oil. The piece sticks to the surface which reverses the wear process. Instead of loosing its part the surface get a new particle.

Step by step friction surface get covered with new metallic pieces which a forming a solid new layer on the surface. This layer is called “protective”. The mineral particle itself is being split into smaller particles, but they continue to float in the oil and works again in other areas.

Aside the major effect of creating “protective layer” the mineral helps to remove dirt (varnish, deposits etc) from metallic surfaces and demolish surface peaks. Changes of a friction surface are shown on the diagram below.

WHAT IS GOOD ABOUT PROTECTIVE LAYER?

The protective layer has some unique properties.

First of all it is smoother than initial surface, peaks collision happens not so frequently which means the whole friction decreases. It reduces energy loss and therefore amount of fuel needed to move the car.

Secondly the layer has a special structure dictated by crystal structure of the mineral. It provides better microstrength and microelaciticity. It means there are lesser destructions happen at collision pointsthan it happened with original surface. It reduces the wear, treated engine, transmission or other mechanism will serve longer.

Finally due to the special structure the protective layer is more “friendly” with oil molecules. They got more strong connection with surface and may stick with bigger density. All that makes oil film on the surface more stable and steady. Oil starts to function better -It serves at higher temperatures, protects from bigger thrust. 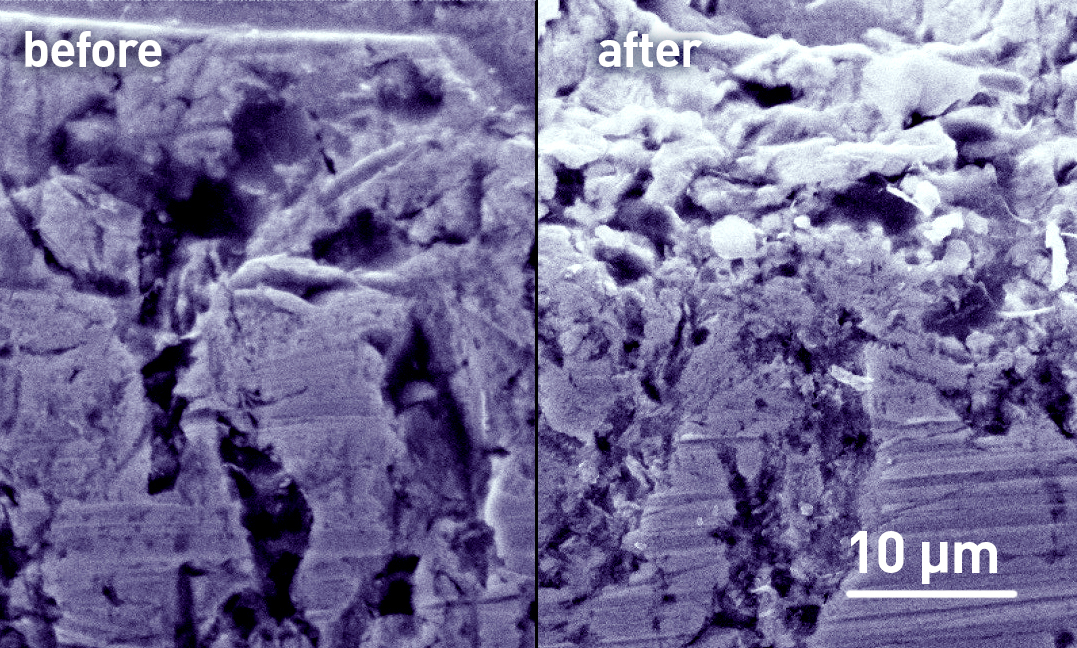