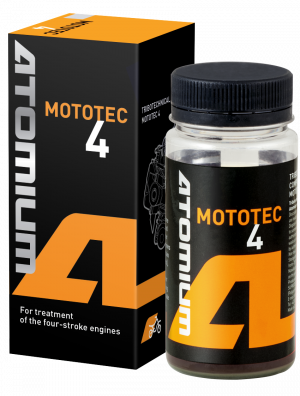 Suitable for all engine types and designs. The compound doesn’t change oil properties, doesn’t affect “wet clutch” and interacts only with the steel friction surfaces.

Oil additive for restoring all types of four-stroke engines of various motor technics.

Tribotechnical compound Mototec 4 uses the same technology as other Atomium compounds. There is a special selection of active minerals that allows steel surfaces to capture metallic micro particles during the friction process. Gradually it restores the worn-out details, brings back their shape and size, narrows friction clearances. The new surface is able to retain permanent oil film, which protects from wear, prevent corrosion processes.

This motorbike oil additive by Atomium is carefully tested with high RPM motorbike engines to make it effective, but safe. The compound is using particularly fine grinding of minerals which differs it from compounds developed for car engines.

The protective metallic layer and the dense oil film improves the work of different mechanisms and systems of the engine – in cylinder-piston knots, in the crank mechanism, and others. It provides a number of positive changes in engine performance.

Important note: the compound doesn’t affect the properties of motor oil intentionally or accidentally. It is completely chemically inactive and doesn't have any side effects.

Important note: the compound is active only in friction areas of steel surfaces. Thus it is completely inactive and harmless in the wet clutches of motorcycles. In fact, in the clutch, there is no friction (as the process) and parts of the clutch are made of kevlar, carbon, sintered brass, and other non-metallic materials.