Another trade show in Europe

The Technorama trade show in a German city Ulm continued the series of demonstrations of Russian technology by SUPROTEC that is known under the brand name Atomium on the global market. 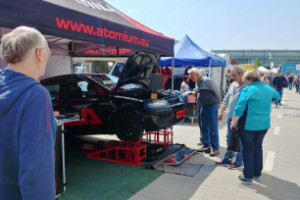 German automobilists had yet another opportunity to examine the engine working without oil due to the tribotechnical compound developed by Russian engineers. This technical amusement attracted no less interest of the forum visitors than the parade of retro cars by Volkswagen and Mercedes-Benz. The trade show visitors had a chance to buy the Atomium products at a special price to prolong the operational life of the engine and other car units and components.

It bears reminding that due to collaborative efforts of the SUPROTEC and ROWE Mineraloilwerk technologists, we launched a series of SUPROTEC Atomium synthetic engine and transmission oils, developed specially for Russian operating conditions.