It is commonly known that the service life of an engine, its economical operation, acceleration capability and starting characteristics depend on the lubricating oil. Each and every auto enthusiast knows his or her predetermined mileage between oil changes. But few of them know that oil degradation happens differently in different engines. That is because every engine has its own conditions and operating modes; also, the characteristics, such as oil and fuel quality, temperature, humidity, and dust content, are not the same. Thus, the predetermined mileage between changes is a relative concept.

What to do? Should you test the oil characteristics in a tribology testing laboratory? That would be costly and uneasy. But there are some organoleptic methods of oil testing. It means that you can perform some tests without any special tools, just by watching, probing and thinking.

WHAT A RAPID ENGINE OIL TESTING CAN DO?

The rapid testing of engine oil helps to evaluate the change in viscosity, presence of water, fuel dilution, mechanical impurities, and deterioration of detergent properties.

The exceedance of these criteria values results in:
- Decomposition of additives,
- Oil foaming,
- Deterioration of lubricating, wear-reducing, detergent-dispersive properties and other qualitative characteristics,
- Higher deposition rate of varnish and carbon on the cylinder-piston group,
- Reduced base number,
- Higher corrodibility and wear rate of friction members.

HOW TO PERFORM THE BLOTTER SPOT METHOD?

The most informative organoleptic method is the Blotter Spot Method. To perform one, you need to stop the warm engine, take out the dipstick and drip 2 drops on a filter paper (or any white low density paper). To compare the results always use the same type of paper. Put the paper with the drop in a warm place for 5-10 minutes. Put it on an even surface, so that the oil drop could spread out horizontally.

Wait for at least 10 minutes to perform the final evaluation of the spot test. On the paper chromatogram, measure the diameters of three spot zones, then identify their color and pattern, uniformity of oil spreading, and finally inspect the following four elements of the Blotter Spot Test:

1 - The center of the spot, which corresponds to initial drop before it was spread on the paper; that's where all heavy insoluble mechanical impurities settle;
2 - The edge zone (dark/black ring) that edges the center with slightly soluble in oil organic impurities; the ring does not appear if the oil is clean or very dirty, and the center has a uniform color;
3 – The diffusion zone is a wide gray ring behind the center, which goes through the edge zone of the oil with light and dissolved organic impurities;
4 – The clean oil ring is the outermost and lightest ring, if degradation of detergent-dispersive additives has started.

This ring rarely comes out. Clean oil gives a big light spot that will disappear in a couple of days. The 4th element of the Blotter Spot Test also disappears in a couple of hours. If the 3rd and 4th elements have an uneven (amoeboid) form, it indicates the presence of water, and the fast yellowish or light brown color of the diffusion zone shows the high level of oil oxidation due to abnormal overheat of the ICE.

EXAMPLES OF CHROMATOGRAMS WITH SPOTS 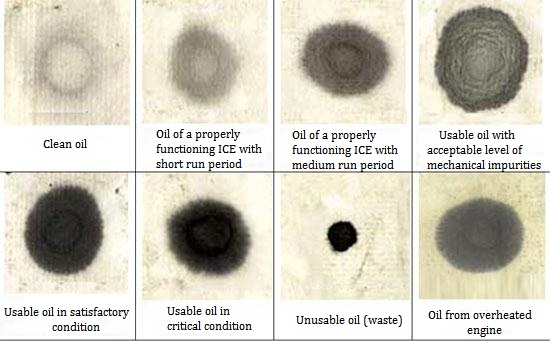 The outer ring of clean oil is an indicator of reduced detergent-dispersive efficiency.

The following factors mean that oil is unsuitable for use and urgently needs to be changed:
- absence of the diffusion zone,
- "coagulation" of the spot (caused by degradation of additives, usually because there is water in oil),
- viscous black and pasty center with metal spangles,
- brown or yellow ring.

HOW TO CHECK THE PRESENCE OF WATER, VISCOSITY CHANGE AND ABRASION OF OIL?

You can check the presence of water in oil by igniting the paper that contains a fresh sample of oil. "Crackling" noises indicate the presence of water. In fresh oil, the acceptable level of water is 15 «crackles» per 25 ml of oil, but in usable oil, water should be absent (water vaporizes during operation). Otherwise, you need to find out the way it got there and change the oil.

You can perform the comparative analysis of oil viscosity using visual inspection of thickness and decline rate of the last drop from the cold engine dipstick, but only at equal oil temperatures. In the course of long-term operation, the oil viscosity of a properly functioning engine rises (it happens because the light fractions vaporize and concentration of mechanical impurities increases, which can lead to a slight increase in frictional losses) but without deterioration of the lubrication performance. So, if oil level doesn't increase or reduces at a normal rate, it is not necessary to check the oil viscosity.

If there is a reason to suspect the increased amount of mechanical impurities, it is required to evaluate their abrasive ability (it is the ability to abrade details) by spreading a drop of oil between two glass slides. If there is any abrasive substance (quartz powders or products of fuel or oil combustion), you will feel it scratching.

TO CHANGE OR NOT To CHANGE? MAKE A CONDITION-BASED DECISION

Due to different operating conditions of engines, the oil change periods specified by the manufacturers of such engines are unjustified. Optimal oil life depends on its technical condition. That is why you should use rapid tests to decide whether to change the oil ahead of time or to increase its change period. Thus, it is up to the car owner to decide when to perform the oil change. And you need to find balance between two extremes: 1 – changing the oil too rarely, and 2 – changing the oil too often. Leaving aside the financial aspect, optimal oil life should be considered as a minimal wear rate of friction members or service life of an engine.

In the first case, the increased wear rate of friction members (particularly, cylinder-piston group and engine crank mechanism) starts, when concentration of mechanical impurities exceeds the acceptable level. Essentially, they are fine carbon particles (than fell off the carbon deposit) that got through the filter. They represent an abrasive substance hard enough to wear piston rings, bushes, bearings, etc. The limit of mechanical impurities is organoleptically tested with the Blotter Spot Test (Please see above – Usable oil in critical condition).

Another reason for increased wear rate of an engine is oil oxidation. Alkaline additive as part of standard additives package deteriorates in the course of the engine operation, because sulfur-bearing gases enter the engine crankcase, which is the oil oxidation process. When oil exceeds the level of neutrality, it becomes itself a source of corrosion wear. Taking into account that all engines have different degree of accumulation of carbon deposit and crankcase blow-by, the oil life up to its limit state is different, too. The processes of oil oxidation and mechanical impurities accumulation are usually correlated, i.e. it is possible to determine the oil condition using just one of these factors.

In the second case, the increased wear rate of friction members is related to the oil "running-in". This is because even if the oil is changed on ground parts, the wear rate grows and, after a while, it declines and becomes stable. This effect is related to the presence of fine particles of combustion and wear products (metals). In certain concentrations, these mechanical impurities reduce the wear rate ("usable oil") and, if concentration grows, they increase it. "Clean" oil doesn't contain such particles (except for a range of oils, where these particles are added in advance), that is why the wear rate increases. So, don't change oil too often. Actually, the oil life (mileage) up to the limit state of oil depends on the engine condition and operating modes, oil and fuel quality and varies from 1 to 20k km.

There are means that help to prolong oil life, they are the so-called Atomium technologies.

Tribotecnical compounds Atomium comprise a series of smart lubricating compositions that belong to a group of friction geo-modifiers and are designed to restore, protect and prolong the operational life of actuators, internal combustion engines, gear boxes and other units and components of vehicles.

The compounds Atomium are not an additive to a lubricant, because they don't improve its characteristic but they do interreact directly with metal surfaces of contact areas (frictional areas) of component and actuator parts. Lubricating compositions Atomium help the system "friction pair – lubricant" (for example, piston ring – bushing, stub shaft – bearing lining, etc.) to move to a new level of power balance; they are a catalyst or initiator of the adaptation process of the system "friction pair – lubricant".

After the engine treatment using the Atomium technology, the oil change period increases mostly due to two factors: 1. Compression recovery, its equilibration on cylinders and reduced oil burning result in the optimization of the fuel combustion process, which leads to reduced carbon deposition and lower rates of increase in mechanical impurities.
2. The increased gas tightness of the cylinder-piston group leads to reduced intensity of oil oxidation and thus, to a reduced base number decline rate.

To evaluate the efficiency of the Atomium technology every auto enthusiast can test his or her motor oil using rapid tests. They should be performed on a certain mileage stage after the oil change first before the engine treatment and then (on the same mileage stage) after the engine treatment using the Atomium technology. It will obvious that not only acceleration capability and economical operation of the engine improved, but also the burning oil consumption reduced and the oil became not so black.