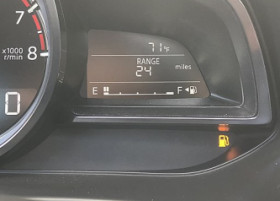 The large part of all the engines, including car engines, run on hydrocarbon fuels. That is, they use the energy of the Earth. During combustion the energy of molecular bonds emits. The large part of all the engines, including car engines, run on hydrocarbon fuels. That is, they use the energy of the Earth. During combustion the energy of molecular bonds emits. It is believed that the reserves of hydrocarbon fuels are limited, and their use is harmful to the environment, so fuel economy is not only of the private financial interest, but also global planetary matter.

Today internal combustion engines are the most efficient energy sources, their efficiency reaches 50%. The total capacity of reciprocating internal combustion engines is 80-85% of all power plants of the World energy. On the road, rail and water transport, in agriculture area, construction, rigging, the piston engine as an energy source has no alternative.
Fuel economy is characterized by specific fuel consumption, i.e. minimum ratio of the value of fuel to useful work produced. In the car all the useful work is spent on the drive mounted units (generators, pumps, compressors), losses in transmissions, chassis (wheels rolling resistance and resistance to shock-absorbing elements), and the resistance to the movement of air. Depending on the mode of use of the vehicle, the ratio of energy consumption varies greatly. For example, at high rates of almost all the energy consumed by the air resistance, and small - to the drive mounted units and heating the tires.

Most of the energy is lost in the engine as an incompletely combusted fuel, thermal, and mechanical losses. Maximum effective engine when using high-quality fuels its efficiency equals to about 70 - 80% of load. When using boost the range of minimum specific fuel consumption expands and corresponds to 50 - 95% of rated power. Also at the other load fuel consumption may increase in times.

That is, first and foremost, for maximum fuel economy it is necessary to drive permanently at speeds of 80 - 110 km / h, depending on the engine, the transmission, and the road (determined by calculation or by instantaneous readings of the flowmeter).

The second factor of the engine efficiency is the intensity of transients. This is an unsteady motion with frequent acceleration and deceleration. The quality of the combustion is primarily determined by the optimum ratio of fuel and oxidant (air). For gasoline engines the amount of air must exceed the stoichiometric ratio of the mixture (14.7: 1) on 10 - 15% and for diesel engines 2 - 2.5 times.

Reasons for the excessive fuel consumption.

Every transition process is accompanied by a temporary violation of the optimum ratio of fuel and oxidizer. As a result, during acceleration the fuel amount is bigger than the oxidant and it is emitted into the tube, and when braking energy is converted into heat of brake discs. Of course, modern cars are equipped with efficient motor control, which is so reliable and perfect that provide for all modes of optimal fuel consumption at high power and minimum emissions, but it just minimizes the negative effect of transients, the specific fuel consumption is still growing. For these modes of drive the average acceleration and engine breaking are the most acceptable. The release of the fuel into the tube is neither too quick, nor slow as the time of the transition process increased. Moreover, the quality of combustion is determined serviceability of all systems: fuel, air supply (including performance CPG), ignition and exhaust. In addition combustion efficiency is influenced by external conditions: temperature, pressure and humidity. Reduced temperature leads to increasing density, but accompanied by a decrease of the thermal efficiency and the deterioration of carburetion. Pressure decrease is proportional to oxygen decrease, and increased humidity requires more losses on vaporization. All this increases the specific fuel consumption.

After the PTO shaft of the energy is lost in transmission. Initially, this loss is caused by the slip in the clutch. In frictional engagement, however, they are negligible, while when using the transformers and hydrodynamic couplings these losses reach quite high values.

Losses in transmission depend on what gear is engaged. Loss of power on a limited flow rate of oil mixing in the transmission housing during the rotation of the intermediate shaft and the drive of the oil pump (if it is coupled with the transmission). The losses depend primarily on the total engagement of the gears that transmit torque. Besides, strength and temperature of the oil have an impact on the losses, too; as well as the distance from the gear to the walls of housing in transmission. The locking collars in some cases, can also cause significant loss of power.

In automatic transmissions losses increase. The main reason of losses in this case is fluid couplings and torque converters. Also transmission affects the fuel consumption mode. With equal speed of movement in low gears the speed increases and the engine load reduce. Both lead to an increase in specific fuel consumption.

The following energy losses occur in the gearbox, CV joints, wheel bearings, wheels, etc. If the vehicle has an independent wheel suspension, then for the transmission of the torque to the drive wheels it needs hinges. In the case where the front wheels are leading, these joints often work with large angular displacement and cause considerable loss. Drive wheels are mounted on ball bearings, in which friction losses are very low. Very important is the correct adjustment of the wheel brakes. If, friction surface do not depart from the drum after the braking, then we have high losses leading to heat generation, and deterioration of the braking operation. Friction loss in a tire is irreversible, since it is heated during deformation and generates heat therefrom, which is dissipated to the environment. All these losses depend both on the state of these nodes, and the state of roads.

Finally, during the motion of the main work is done to overcome air resistance. The air resistance is proportional to the cube of the speed of motion by increasing the speed of two times, it is increased by 8 times. Here the specific fuel consumption depends on the aerodynamics of the car: the drag; friction of the air on the side of the car; resistance protruding parts of the vehicle; swirling air jets of the car, near the wheels and under the body; resistance of the air passing through the radiator and engine compartment.

Thus, to reduce fuel consumption, at all other conditions it is necessary to maintain the engine;