A CAR IN A TRAFFIC JAM 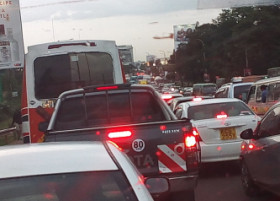 A city, traffic jams… It's a torture rather than driving: the car is stuck in traffic jams for hours but the engine hammers. The driver feels bad, hot, bored and hungry, and is late wherever he or she goes.

· Thirdly, fuel vapors in the engine crankcase can explode in case of insufficient ventilation.