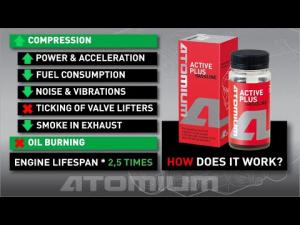 Tribotechnical compound is an engine oil additive aimed to restore engine operating characteristics: compression, power, acceleration, level of fuel consumption, and also to prolong engine lifetime. It also able to minimise risk of breakdowns in emergency oil loss. Compound is designed for treatment of petrol engines (or gasoline ones which is exactly the same) of passenger cars with a mileage more than of 50,000 kilometres. The additive is based on technology which allows to use it for engines of any type and design, including turbocharged and non-turbocharged ones. May be successfully used for gas engines (equally for CNG, LNG and LPG types of fuel) as well as for bi-fuel engines.

Atmium Activ Plus interacts only with metallic surfaces in friction areas. It is chemically neutral, doesn’t affect motor oil properties neither intentionally nor accidentally.

When in area of high temperature and pressure Atomium oil additive activates metallic bonds in the friction surface. This gradually builds up a kind of protective layer, which fills up worn areas and narrows friction clearances to the optimal width. It also able to retain a dense film of motor oil.

This allows you to solve the following tasks:

To raise compression level and make it equal in all the cylinders.

Restored cylinders’ walls and dense oil film tightens gaps between them and piston rings. This sufficiently decrease breakthrough of compressed air to the oil pan and thus increases compression. Treatment with Atomium additive does not raise compression above normal level for the specific type of engine, but make it as it was in the new motor.

Other petrol engine additives may successful work as antifricion modifiers covering cylinders by easy sliding materials. However only restoration of cylinders’ shape may ensure stable and safe compression raising. That’s why Atomium compound may be counted as one of best additives for low compression cases.

To stop engine oil burning or significantly reduce it

Protective layer created as result of engine treatment with Atomium compound narrows friction clearances between piston rings and cylinders. This improves the scraping of oil by the ring and therefore decreases amount of oil to be burnt in combustion chamber at each stroke. It may sufficiently reduce or even eliminate oil burning in the engine.

The natural wear and widened clearances is just one reason for oil burning, though most frequent one. Other mechanical breaks, e.g. hardened valve stem seals or cracks and damages of the gasket, may cause the oil waste. Tribotechnical compound is inactive with rubber details and unable to fix oil leakage through broken parts as it works only in friction areas.

Atomium compound doesn’t change oil flash point or any other property. It restores normal functionality of piston rings. So eliminating of oil burning is just one of positive consequences.

Typical problem of worn engines is irritating ticking in the engine valvetrain. Scuffs on the hydraulic tappet plunger leak oil from internal volume and device can’t perform its functions.

The protective layer created by Atomium compound restores the shape of the plunger surface, optimizes the clearances, which prevents oil breakout and thus resolves the problem. You do not need spend money and time to replace all the tappets or valve lifters.

Note – Atomium compound is not a valve cleaning additive. Other products should be used to remove soot from combustion chamber.

To get rid off engine noise and vibration

Unexpected noises and vibrations in the engine may indicate various malfunctions. Most often case is a kind of iron “clunging” in the engine block, especially at the start up. Engine is cold and all the clearances are widened. Worn parts have even bigger gaps. Piston starts to move not only up and down, but also sideways and hits engine block.

The engine treated by Atomium Active Plus additive from the very beginning has a lubricant film on the friction surfaces and particularly on cylinder walls. It softens very first movements and removes strange noises.

Another reason for vibrations is difference in compression in cylinders. In each of them there is its own level of power, so engine is being pushed differently at each stroke. As it was described above Atomium compound makes compression almost equal. Engine starts to work more smoothly and quietly.

To restore the oil pump and pressure level

The drop in oil pressure may be caused by overall lack of oil in the system or by wear of the oil pump.

Restoring of the friction surfaces brings back outlet pressure of the pump to a nominal level and thus solves the problem.

Nominal compression is a key factor for effective fuel combustion. The more energy engine extracts from the fuel the less petrol it needs. In addition treatment by Atomium compound decreases friction by almost 50%. In total these factors may reduce fuel consumption by 6-8% while you maintain your regular driving mode. The exact number depends on initial state of your car and its mileage.

Note – Atomium compound is not a fuel additive, it doesn’t change fuel properties and neither changes combustion regimes.

To increase engine power and acceleration

Normalisation of compression provides nominal power output of the engine. It is especially noticeable at acceleration when you need to raise up revs abruptly.

To reduce the smoke in the exhaust and its toxicity

Recovery of compression and optimization of gaps in the cylinder-piston group ensure high-quality fuel combustion and reduce oil fumes. This reduces the content of unburned fuel particles and oil combustion products in the exhaust gases, which reduces their smoke and toxicity.

Atomium additive not only restores worn petrol engines or gas ones, but also sufficiently slows down subsequent wear. It extends engine lifetime by 2-3 times and let you avoid costly rebuild.

Treatment by Atomium compound allows:
To facilitate engine start up and minimize its wear at the moment of dry friction

Protective layer created by Atomium product has a microporous structure. The motor oil penetrates those pores and forms a dense and permanent film all over the surface. This oil never flows down to the oil pan even during long idle periods.

So from the very beginning engine parts and first of all pistons are lubricated. It dramatically decreases wear forces at the engine start up. It particularly helps in the cold weather when it is hard to pump frozen oil through engine.

In traffic jams the engine works in worse possible regime. It has lack of cooling because there is no oncoming air flow, it has low oil pressure in the system because of idle work and low revs. In these conditions the motor oil get overheated and liquefied. The level of oil anti wear protection goes down.

In the treated engine all friction surfaces are protected by metallic layer, which has increased microelasticity (it is deformed in a collision and then restores its shape instead of being destroyed) and microhardness (it requires more load to be destroyed). This layer resists wear much better than original surface. A denser oil film on the surface of the layer also reduces amount of parts’ contacts.

The oil film, held on the protective layer due to its structural features, is able to protect the engine from scuffing and jamming in the event of a sudden drop in oil pressure.

This allows you to avoid breakage if the oil loss or pressure drop was not noticed immediately. In addition, in some cases (depending on the design of the specific engine), this allows you to gently drive the car to the service station on your own.

Signs of mechanical wear come slowly while sudden breaks cause noticeable changes in the vehicle wok. Time to time you may vaguely draw attention that engine is not as dynamic as it used to be, you spend a bit more to the fuel to travel the same distance as always, some hum or knocks appeared in different driving modes. In such case you may be sure – the reason is wear.

It is impossible to stop the wear. Moreover it only accelerates in time and brings your car closer and closer to the inevitable repair. Following symptoms may advise you that it is time to consider engine treatment by restoration additives:

There is a sound of "iron clang" when starting the engine

Due to wear of the cylinder walls, the gaps between them and pistons are widened. The let pistons to make some sideways movements and hit engine block. This is especially noticeable when starting in the cold weather, when the gaps are widened even more. This indicates that the cylinder surfaces are very worn, and each hit wears them even more.

There is a constant blue smoke in the exhaust.

Blue smoke means that oil is constantly entering the combustion chambers, which indicates that there are widened gaps between cylinders and piston rings due to their wear.

Engine started to work louder, harder, and there was a vibration.

These signs may indicate that the compression balance is disturbed.

Pistons in different cylinders are pushed with different forces, which disrupts the uniformity of the engine. If this sign appeared suddenly and sharply drew attention to itself, it is possible that there was a breakage – for example, a piston ring burst. If the vibration and noise increased gradually, imperceptibly, then most likely this is the result of wear. In this case, the Atomium tribotechnical compound will be able to restore the worn surfaces.

There are no completely plain surfaces even if they look as a mirror-polished metal. On the microlevel there are peaks and hollows. When you rub two surfaces against each other the contact happens between peaks. In a little area around the point of contact for a split of second there happen to be a very high (more than 1000 degreed) temperature and pressure. Peaks get damaged and their particle flows out together with motor oil.

Atomium tribotechnical compound contains tiny particles of the active mineral. When in area of high temperature and pressure the mineral activates electronic connections in the metal. It allows the surface to capture the metal from the engine oil. It happens all over the surface here and there over the time. At the end a special protective layer is formed on the entire friction surface. It is stronger than a normal surface and can hold denser oil film due to its porous structure.

The micropores of the protective layer are filled with oil, which forms a continuous film under surface tension forces. Restoring the shape and more effective lubrication, allow the parts to perform their functions as it was laid down in the engine design, which leads to the restoration of the performance characteristics of all friction units. 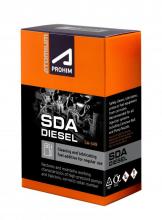 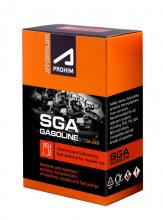