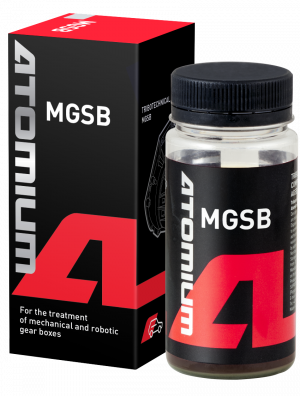 Manual gearbox oil additive to restore operative parameters, reduce noise and vibrations, facilitate gear shifting, reduce energy loss and thus save fuel consumption. Suitable for all types of manual gearboxes including semi-automatic ones as they use the same type of torque transmission mechanism.

MGSB compound is compatible with all brands of transmission oil. It is chemically neutral and doesn’t change oil properties.

Atomium MGSB creates conditions for gradual restoration of worn friction surfaces of gear teeth and synchronizer couplings. As result a new protective metallic layer appears on the friction surfaces which may retain dense oil film due to its microporous structure. Optimized friction clearances and improved lubrication allows you to solve the following tasks:

To reduce or completely eliminate the hum, noise and vibration when the transmission is running

Restored shape of the gear teeth ensures their correct and smooth engagement. In addition, their contacts are softened by a denser oil film on the surface of the teeth. It eliminates micro-impacts of teeth and thus reduces the hum and noise during operation.

Noise and vibrations may be also caused by worn bearings. It gives higher tone of hum. Atomium MGSB is able to restore them along with gears as they are lubricated by the same oil.

Atomium oil additive is effective regardless of what specific gear pair is noisy. All of them are lubricated with the same oil and are being treated equally. Restoration process goes on until the worn details are restored to the optimal shape.

Atomium MGSB may be useful also to facilitate running-in of new gearboxes. The process goes faster and quitter.

To facilitate gear shifting, get rid of the "crunch" when switching

In manual transmission there may appear troubles in gear shifting. Gears are not shifted from the first stick movement, the switching is hard, some crunching noises may appear. Very probably it shows that teeth of the synchronizer clutch are worn and are not engaged smoothly.

Tribotechnical gearbox additive restores the surfaces of the teeth on the synchro couplings. In addition, the restored surfaces retain a denser film of oil. This makes it easier for the coupling to engage with the locking ring and then with the transmission gear. Gear shifting becomes smooth, quiet and fast.

A dense oil film on the surfaces of the teeth ensures their smooth entry into and exit from the engagement, which reduces energy losses during transmission operation. This increases the run-out-free running of the car in neutral gear, and leads to a reduction in fuel consumption.

To extend the lifespan of the gearbox

A denser oil film on the surfaces of parts treated with Atomium gearbox additive significantly slows down their further wear and protects them when working with high loads. This extends the service life of the entire unit, allows you to postpone the repair or replacement of the manual transmission even if the first signs of wear appear.

Tribotechnical compound contains particles of the active mineral. Being in transmission oil they time to time get into the local zones around a point of surfaces’ contact. There are a high local pressure and the temperature which exceeds 1000 °C. In those conditions mineral get able to activate metallic bonds, which let the surface to capture and attach metal microparticles from the oil. Gradually, a solid metal protective layer is formed on the entire worn surface. The mineral itself remain in the oil and initiates restoration process in other points.

The protective layer is hard and smooth, which reduces friction. It also has a porous structure with a large number of micro-hollows. They are filled with oil, which forms a continuous film due to surface tension forces. This oil film is never completely separated from the surface of the part, does not flow down even during a long idle time. The protective layer itself can withstand heavy loads due to microhardness and microelasticity compared to the factory surface.

Restored shape and effective lubrication allow the parts to perform their functions as it was laid down in the design of the unit, which improves performance parameters of the whole mechanism.

Gearbox additive MGSB must be added once to the transmission oil through the standard oil filling hole. To continuously maintain the recovery effects it is recommended to add the compound with each regular oil change in the transmission.