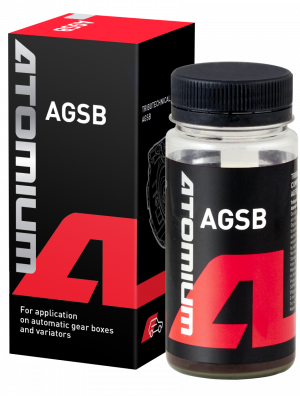 It also helps to restore belt tension in CVT (continuously variable transmissions), eliminate chain slips, extend service life of cones. Suitable for any brand of gearbox and for any type of transmission fluid.

Atomium AGSB restores worn out friction surfaces in various sections of a gearbox. A new metallic layer appears which is more hard and smooth than original surface. Also it is able to retain dense oil film. This improves operating of different mechanical systems. Particularly it allows to solve following tasks.

One of most often causes of shifting delays in automatic transmission is low oil pressure due to the wear of oil pump. To shift gears electronic controller sends a signal to valves in hydraulic block to close some of them and open others. Closing valves removes oil pressure from one friction pack and it gets released. At the same time oil comes through newly open valve and bring pressure to another clutch pack and lock it. If oil pressure is low locking of the second clutch happens with a little delay. For a split of second the torque is lost, car wheels slow down. When torque is caught back the speed of input shaft is faster than the output ones which gives feeling of unpleasant jerk or kick.

No matter at what gear shift the delay happens as it happens because of the same common reason. Restoration of the oil pump helps all of them to work correctly.

To reduce noise and vibration when the transmission is running

The metal protective layer created by Atomium AGSB restores the shape of the gear teeth. It ensures their correct and smooth engagement. A dense and permanent oil film retained by treated surfaces also makes the contact of teeth softer, decreases friction and wear. All this leads to a reduction in micro-impacts, ensures smooth interaction of the gears of the planetary transmission and thus reduces the noise and vibrations.

There is no matter at what exact shift the noise is most distinct and loud. All the gears are lubricated by the same all and Atomium AGSB will treat all of them. The only difference is that most worn out and consequently noisiest parts take longer to recover.

A dense oil film on the surfaces of the teeth ensures their smooth entry into and exit from the engagement, which reduces energy losses during transmission operation. This leads to a reduction in fuel consumption.

To restore the chain tension

Restoring the geometry of the CVT cones, as well as retaining a denser layer of oil on the surface, can prevent chain slippage. It decrease jerks when picking up speed, makes acceleration stable and fast, sufficiently reduce speed of further cones wear.

It should be noted that the transmission oil used in continuously variable transmissions contains special additives that improve the grip of the chain and the surface of the cones. Thus, improving the performance of the lubricant does not weaken the friction between the chain and the cone, but on the contrary: the denser the oil film on the surfaces of the parts, the better the grip.

To extend the service life of the unit

Friction surfaces of metallic parts are not completely plain. On the microlevel there are micropeaks and hollows. When two surfaces rubbing each other they first contact by peaks in multiple points. In small area around such point there happens to be very high temperature and pressure.

Atomium AGSB contains special minerals. When they get into area with high temperature and pressure they get able to activate electronic links in the metallic surface. Thanks to that small particles of metal from the oil are getting attached to the surface. This process repeats in different points gradually creating a solid continuous protective layer all over the surface. The particles of the mineral itself remain in the oil and continue to affect the surface in other areas.

The protective layer is characterized by a porous structure with a large number of micro-hollows. They are filled with oil, which forms a continuous film on it due to surface tension forces. It is able to withstand increased loads on the breakdown, does not drain, even when the unit is idle for a long time. The protective layer itself wears out much slower than the original factory surface due to increased microhardness and microelasticity.

HOW TO USE IT

Auto gearbox additive AGSB must be added once to the transmission oil through the standard oil filling hole. To continuously maintain the recovery effects it is recommended to add the compound with each regular oil change in the transmission.