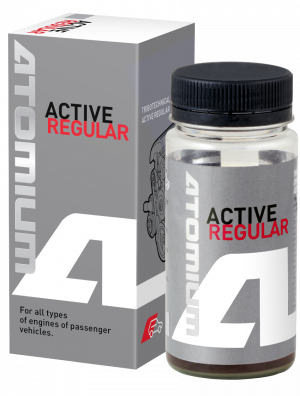 Tribotechnical compounds of ACTIVE series create conditions under which the friction surfaces in engine parts are covered with a metallic protective layer, which has a special structure. This layer keeps more oil on the friction surfaces. Compound «Active Regular» provides support of this layer and its recovery in case of wear and tear, which in turn keeps the engine performance at the level reached at the processing engine with tribotechnical compounds of ACTIVE series.

It provides the following effects

Increasing the resource of the engine operation

Facilitating engine start up and protection during «cold start-up»

treated surfaces are able to retain the oil layer during the lengthy downtime of the engine. It facilitates the first shaft revolutions and prevents increased wear of engine with insufficient oil on friction surfaces at start-up, which is especially important at negative ambient temperature.

thick oil layer in clearances of the cylinder-piston group provides the necessary gas tightness, which leads to maintaining compression and quality combustion. Dense oil layer displaces the friction regime in the direction of the hydrodynamic, which reduces the friction losses. All this allows to keep the engine power at nominal values.

keeping optimum clearance between the oil ring and cylinder wall prevents oil from entering the combustion chamber and allows to reduce or eliminate the oil burning.

Low level of noise and vibration

recovering of compression in the cylinders leads to smooth engine running. In addition, a dense layer of oil softens work of friction parts. Altogether, this reduces vibration and noise in the engine.

recovering of compression and optimization of gaps in the cylinder-piston group improves combustion quality, which in turn decreases exhaust CO/CH emissions.