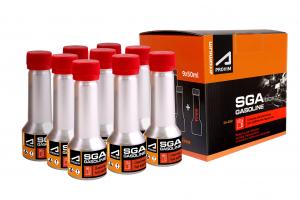 Atomium Aprohim™ SGA fuel additive gently cleans fuel equipment, lubricates it, protects it from corrosion and prevents the formation of sludge. This restores the performance of fuel pumps, injectors, protects them from wear and extends their service life. Complete restoration of the fuel injection equipment improves the injection, reduces fuel consumption, and improves dynamics.

THE ENGINE DOES NOT START

One of the most common symptoms of problems in the engine is its difficult start. Drivers often complain that the car does not start well on cold weather. There may be several reasons for a difficult engine start. Insufficient compression, poor fuel, faulty candles, and so on. Only a full-fledged diagnostic at the service station can determine exactly why the VAZ or any other car starts badly.

One of the reasons for the difficult start-up may be a problem in the fuel system. In order for the engine to start smoothly and without problems, a cloud of fuel and air must be formed. When the fuel is sprayed into the chamber instead of being poured, then proper ignition occurs. If there is a jet, the excess can get through the rings into the oil sump and the engine will not start, or it will be uneven. If the engine starts badly and the problem is incorrect mixing, then the multifunctional cleaning additive in gasoline "ATOMIUM APROHIM-SGA (SGA)" will definitely help. The components of the composition clean the injectors, restoring their proper operation: normal atomization of the fuel mixture. Accordingly, when starting "cold", the correct fuel mixture enters the chamber. SGA additive is aimed at restoring correct mixing and smooth operation of the engine at the time of start-up, among other things.

VIBRATION AND UNEVEN OPERATION OF THE ENGINE

Engine vibration, especially noticeable at idle speed, can be the result of a violation of the fuel supply to different cylinders. Incomplete or untimely combustion of fuel leads to a decrease in pressure on the piston and the engine loses power at one or more cycles of operation. This is usually due to contamination and wear of fuel injectors elements.

In this case, the problem can be solved by using multifunctional cleaning additives in gasoline "ATOMIUM APROHIM (SGA)". If you use it for each refuelling, it will gradually remove dirt in the nozzles, ensure proper needle mobility, and remove deposits in the nozzle holes.

The causes of vibration or uneven engine operation may lie in problems unrelated to the fuel system – the occurrence of rings in some cylinders, uneven compression reduction due to wear and so on. The use of a fuel additive will eliminate the fuel system from the causes of engine vibration and encourage the diagnosis of other components.

One of the reasons for the loss of engine power, reduced dynamics, and increased fuel consumption may be the condition of the fuel system. Any violations in the fuel supply – insufficient or increased pressure in the ramp, incorrect spray, loss of hydraulic density in the injectors-will lead to a drop in the efficiency of the entire engine. Continuous use of a multifunctional cleaning additive in gasoline "ATOMIUM APROHIM -SGA (SGA)" can correct a significant number of potential problems in the fuel system. First, it will clean the mobile elements of the fuel equipment, which will improve their fit, get rid of "wedging". Secondly, the additive will restore the surfaces in the nozzle valves, ensure their constant lubrication and protection from corrosion.

All this can normalize the operation of the fuel system, restore high-quality injection and spraying, and as a result-the completeness of fuel combustion.

If the use of "Atomium Aprohim™ - SGA (SGA)" did not lead to positive changes during a significant run, you need to check the engine for other possible causes of power loss – a decrease in compression, as a result of General engine wear, turbocharger problems, violations in the engine oil system.

CLEANING THE INJECTOR AND INJECTORS WITH YOUR OWN HANDS

The additive "Atomium Aprohim™ -SGA (SGA)" is designed for soft and gentle cleaning of fuel equipment. Its price will not become a financial burden for you. Cleaning of the injector and injectors occurs due to the presence of special components in the composition, as well as a mineral that is a natural and gentle abrasive. This cleans the mineral deposits (varnish, sludge), which are gradually deposited inside the nozzle at shut-off needle. Dirt makes it difficult to operate the nozzle, reduces the needle stroke. In this case, the solenoid valve is loaded, and the nozzle fails as a result. The mineral in the additive cleans the needle, restores its course, and the chemical component of the SGA cleans the nozzle from the inside. The SGA composition gently and carefully cleans the atomizer, injectors, and combustion chambers. It contains lubricating additives that provide protection against wear of low-and high-pressure pumps and the mechanical part of injectors, significantly increasing their service life. It also provides cleaning and lubrication of all parts of the injector, restores fuel injection characteristics, and prevents failure of electrical and piezoelectric solenoids.

Drivers of old cars are much more likely to face the problem of starting the engine than owners of modern cars. In older cars, the fuel supply system is usually based on a carburetor. Until the end of the XX century, this mechanism was installed on most cars. The additive "ATOMIUM APROHIM -SGA (SGA)" copes well with cleaning of modern fuel injection systems, including TSI, TFSI, GDI, MPI, and the carburetor. Cleaning the carburetor (including VAZ 2107) with a CGA additive occurs on the same principle as in the injector. In old carburettors, the locking needle or jet may become clogged. They must be cleaned in the same way as the injectors in the direct injection injector. The liquid will perfectly clean the jet in the carburetor.

CLEANING THE FUEL SYSTEM OF A GASOLINE ENGINE

The main task of the additive " ATOMIUM APROHIM - SGA (SGA)" clean-up spray gun, nozzles and combustion chambers. The additive also provides lubrication of all parts of the nozzle, restores the characteristics of fuel injection, and prevents failure of electrical and piezoelectric solenoids. Cleaning the entire fuel system of the car is not included in the functions of the composition. It is necessary to use fuel system cleaner " ATOMIUM APROHIM ". However, SGA additives can also be especially useful for the entire fuel system. Thanks to the mineral included in the composition, the fuel system pump of the car is cleaned.

In some cases, the use of the SGA additive can help to normalize the already disturbed operation of the fuel system. However, you need to remember-the additive composition is balanced in such a way as to have a soft, gradual effect that does not violate the normal processes of fuel supply and combustion. That is why when using it, you should not expect immediate effects of restoring the characteristics of aggregates. It is much better to use the additive as a preventive tool that does not allow problems to occur.

If the process of contamination and wear of fuel equipment elements has not yet led to irreversible mechanical failures, the SGA additive can restore normal operation of the system. With constant use for 3-7 thousand kilometres of mileage (depending on the degree of contamination), the additive will clean the valves, restore the surface of the fit, and ensure the operation of mechanisms in nominal parameters. With the constant use of the SGA additive, the performance characteristics of the injectors are restored. The additive cleans the details of the spray mechanism. After applying the SGA, there is a recovery of the nozzle, sprayer and stop needle. The action of the lubricant components of the additive is aimed at further protecting the system from coking and deposits sticking to the parts.

SOFT FLUSHING OF THE FUEL SYSTEM

"Soft cleaning" in the name of the composition is not just a beautiful phrase. The components of the SGA additive are selected so that cleaning takes place within a certain time. There is no aggressive chemistry in the composition, which exfoliates the skin in a few minutes. Thanks to its soft properties, "ATOMIUM APROHIM -SGA (SGA)" protects the fuel system from getting into it undissolved carbon, which prevents breakdowns. Soft cleaning occurs gradually, with the incoming flow of fuel. The dirt is cleaned in small portions, dissolving, and burning along with the fuel, without clogging small channels. On average, the effect of soft flushing of the fuel system appears after 1500-2000 kilometres (depending on the degree of contamination).