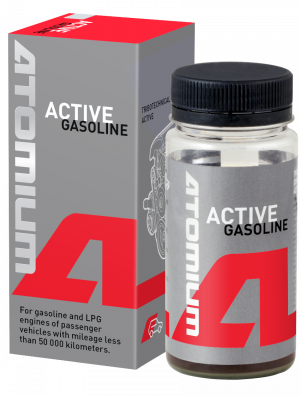 Engine oil additive for restoring engine performance characteristics: compression, power, acceleration, effective fuel consumption, as well as for extending the wear life and protection in emergency situations. It will get rid of oil extra usage and engine smoke. The compound is designed for the treatment of gasoline and gas engines (LPG, CNG) of passenger cars with a mileage less than 50,000 kilometres. Suitable for all engine types and designs, including turbocharged and non-turbocharged.

I have treated all my cars from they were almost new. Our family is quite big, so we own many cars. Engines on all of them work just fine. They never consume motor oil, perfectly start in the cold (while neighbors were struggling to start their cars and asking if anyone could help). Also, I can definitely say that after I used Atomium - the engine runs quieter!!!

I have been using your product for about 15,000 kilometers, still don't know if there is a difference before and after

I drive 3 thousand km after additive, I can say that it did not get worse, even I think the engine began to work better faster quieter and smoother.The oil consumption has reached a minimum, although this is a Honda at high speeds, it always eats a lot of oil.

didnt feel anything after using

A great additive. I added on 25 000km for a new engine and after two bottles each oil change I add a regular. Now dynamics and power on 85 000 km is as new.

I have visited your stand at Frankfurt Messe in September this year. Impressed!!! use your products for engine, transmission, and really happy with the results, you prove it, and I would recommend your innovative tribotechnical compounds to anyone who ask me!

There were no problems with the engine, I decided to carry out treatment as a preventive remedy. After the second stage, I drove 1000 km, the car feels like the engine is running more easily, and I don't feel any vibrational effects.

Atomium MGSB - Transmission oil additive to fix manual or semiautomatic gearbox, to restore working parameters, reduce noise and vibrations, facilitate gear shifting, reduce energy loss and thus save fuel consumption.
Removes kicks and jerks Transmission oil additive - AGSB (80 ml) is designed to protect against wear, extend the life and restore the characteristics of automatic gearboxes, including variators, of any type and with any type of transmission oil.
More
Atomium Engine Flush 200 - oil additive to clean up engine during 200 km prior to oil change - Long-term soft flushing of the engine oil system

Long-term flushing ATOMIUM APROHIM™ is designed to clean the internal surfaces of the engine from long-standing deposits, removes black sludge and other contaminants and deposits.